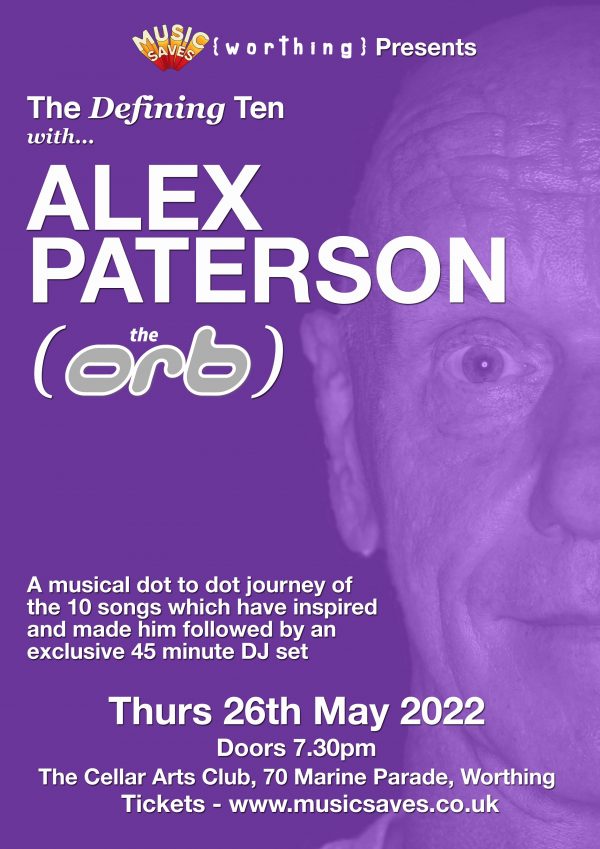 The Defining Ten is where an artist/creative is invited to take us on a musical dot to dot journey of the tracks which have led them to who they are today. These could be the first song they have a memory of, first purchase, first song they learnt to play, the track which opened doors, the track which closed doors, a track which inspired and lead to a new musical direction – so expect a variety of tracks from themselves and other artists. These tracks will be played in turn – either from vinyl, cd or streamed – and discussed with the artist. Afterwards the evening will end with a unique performance and chance to meet the artist afterwards.

Paterson’s career began working as a roadie for legendary punk act Killing Joke and went on to form The Orb in the late 80s with Jimmy Cauty (of The KLF) before the act exploded in the early 90s creating a genre NME named “ambient house.” The absolute classic Rickie Lee Jones sampling “Little Fluffy Clouds” should need no introduction and remains a chill out/ dance staple to this day. With their top ten single “Blue Room” the band hold the record of the longest ever single (and also resulted in an unforgettable Top Of The Pops “performance” of the act playing chess while the song played!)

Further highlights include 4 top 40 charting albums (one of which the number 1 album “U.F Orb”), global tours bringing dance/ electronica to the stadium masses years before the term EDM even existed, and collaborations with a diverse range of artists including Jah Wobble, Lee “Scratch” Perry. Pink Floyd’s David Gilmour, Steve Hillage, King Crimson’s Robert Fripp and Roger Eno. They also remain an in demand act for remixes, having done over 80 remixes over their career.

With a career like this Alex Paterson’s Defining Ten journey is surely one to take us to the heart of the Ultraworld and beyond…and after we’ve discussed these 10 songs with him the audience will be treated to an exclusive live 45 minute DJ set!

Please note this is a ticketless event – you will need your order number/ email receipt to gain entry to the show.

This event plants trees – for each ticket purchased we will plant one tree with onetreeplanted.org #nomusiconadeadplanet